The Minimoog style VCO is just a half size AMORE board. This picture shows a prototype.

This voltage controlled oscillator has a core that is similar to the one used in later Minimoogs. But with today's op-amps and some other changes, it offers even better stability. The exponential converter uses a conventional NPN transistor pair and a tempco resistor that are potted together for best temperature stability. This results in stable tuning with low drift, fast swing-in after switch-on and good temperature stability. The triangle and sine waveshaper is the same circuit as used on my earlier VCOs and based on the circuits in the Moog 921B module.
This VCO has a LFO mode, just like the Basic VCO. So like on the Minimoog, you can use one or two of the VCOs as LFO for modulation. In contrast to the Basic VCO, this module does not switch the timing capacitor but only adds a negative CV. This avoids some problems with the triangle and sine waveforms but limits the lowest frequency to circa 0.17 Hz (six seconds per cycle).
The VCO core and waveform selector areas on this circuit board are identical to the Woodwind VCO board.
Note that this board is plug compatible with all the other AMORE VCO boards. Differences in the feature sets between boards only mean that controls for unavailable features do nothing.

The Bergfotron Minimoog style VCO has the following functions: 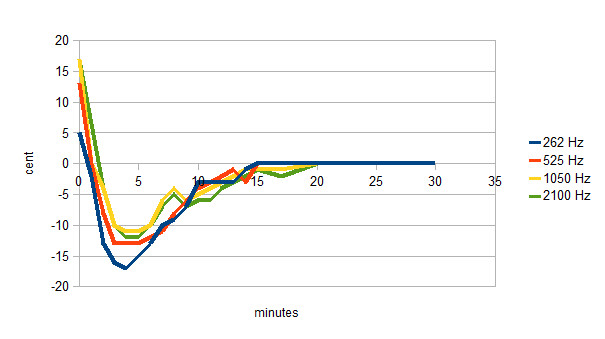 This swing-in graph was measured by letting the VCO warm up for at least 1 hour, tuning it carefully, switching the power off for at least an hour, turning it back on and immediately start to measure the tuning (without re-tuning it). This procedure was repeated with the VCO tuned in four different octaves. As you can see, it starts very slightly sharp but immediately goes slightly flat for a couple of minutes while the components warm up. This deviation is however very minor, and already after 10 minutes it is almost in tune. After warm-up there is essentially no drift. However, I have not been able to measure the stability over varying ambient temperatures yet.
These measurements were made with the AMORE Starter Kit and also include the warm-up and temperature stability of the AMORE power supply (which is very good).
You might have expected that the swing-in behaviour would be exactly the same as on the Woodwind VCO, since it uses the same VCO core. Well, I suppose the slight difference is due to component variations.

This module produces the four classic synth waveforms. Measured on the oscilloscope at 1 kHz. 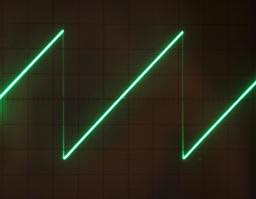 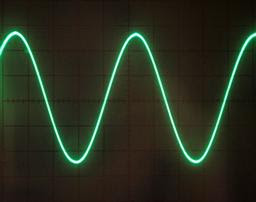 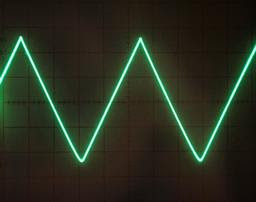 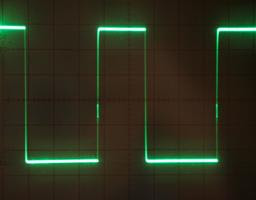 8 pin DIL component carrier
1 kohm 3500 ppm/°C temperature compensation resistor (1)
Dual NPN transistor or a hand-matched transistor pair (1). The 2SC1583 is a good choice, if you can find it. I have used a SMD type transistor pair and SMD type tempco resistor mounted on a small circuit board on a 8 pin component carrier. Even if you use conventional parts, it is a good idea to mount them on a component carrier and cover them with heat insulating material. I used epoxy glue for this.
2N4391 or compatible FET. This must be a fast switching, low Rds-on type.
LF412 dual OP-amp (1). Other decently fast op-amps with low offset and drift can be used.
OP177 single precision op-amp (1). Other ultra-low drift op-amps can be used. This one doesn't have to be fast.

No hand-matching required if you use a matched transistor pair.

These are the alignment steps for the Minimoog style VCO core:

1. Adjust the supply voltages to exactly 15.0 and 10.0 volts (on your power supply). Note that this module uses the 10 V supply for the tuning-critical parts, so his has to be very stable. Using the AMORE power supply is recommended.

2. Adjust "scale" to get exactly 1 octave per volt on the KOV input.

3. Adjust the HF-trimpot to get exactly 1 octave per volt at higher frequencies (above 2 kHz).

4. Adjust "init freq." to the desired base frequency so the VCO is in tune with other VCOs when fed the same control voltage.

Alignment of the triangle and sine converters:

1. Set the VCO to around 500 – 1000 Hz and adjust “tri offset” so that the triangle wave is roughly centred on the oscilloscope (relative to 0 volts).

2. Adjust “tri shape to make a good triangle shape. This will change the DC offset, so repeat steps 1 and 2 until you are satisfied.

3. Connect an amp/loudspeaker to the VCO and switch to the sine waveform.

4. Adjust “sine offset” so that the sine wave is roughly centred on the oscilloscope.

5. Adjust “sine sym” to give a symmetric waveform on the oscilloscope

6. Adjust sine shape while listening to the sound. You will hear when there is a minimum of overtones.

7. Redo step 5 and 6 while listening to the sound. You will hear when you have the purest possible sine.

8. Recheck the DC offset and adjust if necessary.

This board is quite densely populated but does not require matching of components. For best temperature tracking you should glue the tempco resistor and the exponential converter transistors together.

The component placement plan contains pairs of capital letters. These are supposed to be connected with insulated wires.