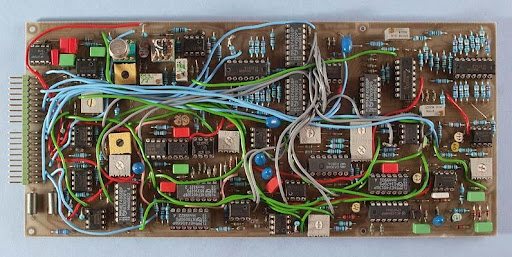 The Advanced VCO is an extended size AMORE board. Even with the extended size board, it was a challenge to fit all circuits on one single board.

With this module I wanted to include the most important features from my Complex VCO and in addition my own Woodwind Waveshaper plus Jürgen Haible's VC-divide by N. The combination of the latter two circuits creates some unique possibilities, which are detailed below.
With my concept of ”reusable engineering”, the circuits on this module are broken down in six separate parts:

The module generates ten different waveforms. It has two separate outputs and with the waveform selector you can select one of eight combinations of these ten waveforms. Note, however, that the combinations are hard-wired and you can't select waveforms individually for the two outputs. That would have required one more CV input than the AMORE standard allows for. And there was no room on the board for two independent waveform selectors anyway.

The advanced VCO contains a waveshaper circuit of my own design that is mainly intended to mimic the behaviour of woodwind instruments. It is inspired by the vintage German wind synth Variophon. You can read all about the theory on the Variophon homepage.
According to the theory, the proper way to emulate a reed instrument is with triangular pulses where you can adjust the up and down slopes. For some reason, the Variophon used rectangular pulses instead. Probably because it was easier to implement in electronics. Because of this, I just had to test it the proper way, with triangular pulses. And in my circuit the pulse widths are even voltage controlled. To be able to emulate the Variophon, I added rectangular pulse too. And as an added bonus I even added a double pulse, where you can voltage control the width of the positive and negative pulses separately.
The circuit basically works like a linear VC-AD envelope shaper. You could actually use it as just that. The pulse width is independent of the oscillator frequency, which is according to the reed instrument theory. This is where this circuit differs from ordinary pulse width modulation. If you set the up slope slower than the VCO frequency, the circuit will perform frequency division. This can be heard in the last sound clip. You can listen to the module in the following sound clips.

The advanced VCO also contains a circuit that can divide the frequency in any even number between 1 and circa 70. The circuit is designed by Jürgen Haible and he call it the Voltage Controlled Divide by N. I added an exponential converter to make the voltage control exponential. This makes it easier to control the lower division ratios, which are the ones you use most. It also eliminates the original circuit's annoying habit of cutting out the signal when the CV goes negative.
Like most, this frequency divider outputs a square wave. This makes the sound less interesting. But on the Advanced VCO, the woodwind waveshaper is connected after the divider. So you get all the different waveforms from the woodwind waveshaper and frequency division too. And this can be mixed with any of the other (undivided) waveforms on the module. 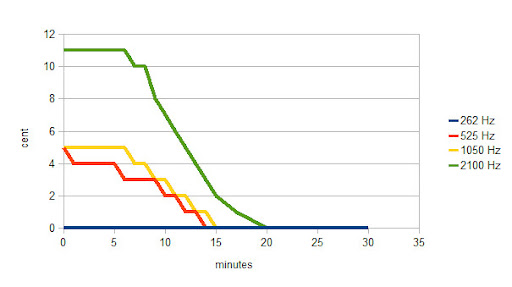 This swing-in graph was measured by letting the VCO warm up for at least 1 hour, tuning it carefully, switching it off for at least an hour, turning it back on and immediately start to measure the tuning (without re-tuning it). This procedure was repeated with the VCO tuned in four different octaves. As you can see, at lower frequencies it starts spot on and remains there as long as you pay the electricity bill. At higher frequencies it goes very slightly sharp for a couple of minutes while the components warm up. This deviation is however very minor and already after 10 minutes, it is almost perfectly in tune. 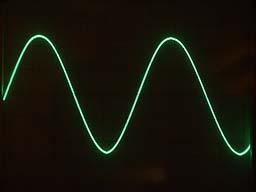 This is an ordinary sine wave. It uses my tried and trusted triangle to sine wave converter, that was inspired by the one in the Moog 921B. Because it is fed by a purer triangle wave, the sine is cleaner than on sawtooth core VCOs. 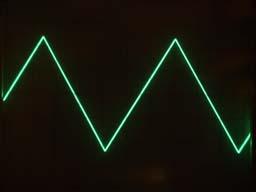 The triangle is the basic waveform that is produced by the VCO core. 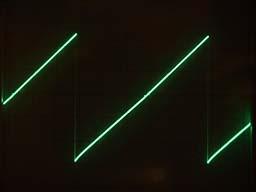 With the triangle and square wave from the core, a 4066, an op-amp and some resistors form a nice sawtooth wave. 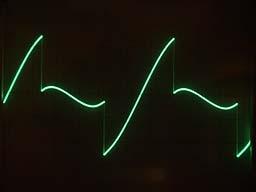 The even harmonic waveform is a sawtooth with double frequency, mixed with a sine wave in the proportions 1:1,27. This creates a waveform that has all the even partials but no odd partials. 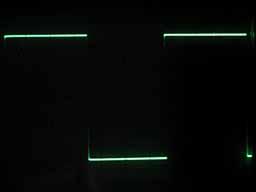 The odd harmonic waveform is simply a square wave. This is the output from the VC divide by N. This means that you can alter the frequency dynamically, by voltage controlling the division ratio. Note that this does not affect several of the other waveforms so you can mix waves with different pitch from the same VCO. There is always an integer ratio between the frequency of these waveform, in contrast to when you mix the output from two different VCOs. 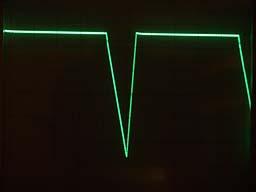 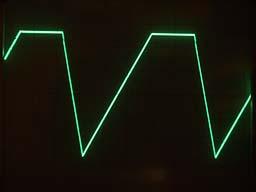 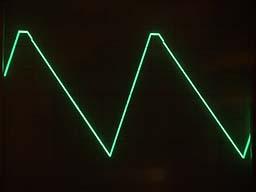 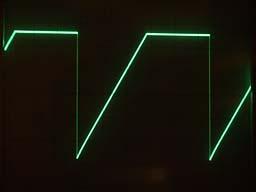 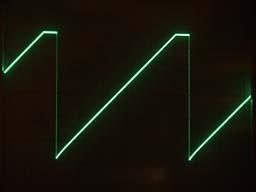 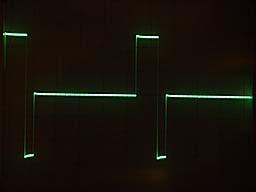 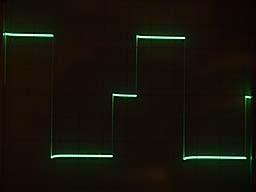 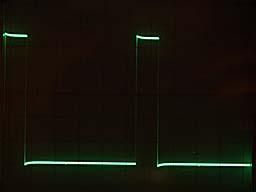 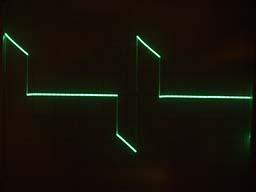 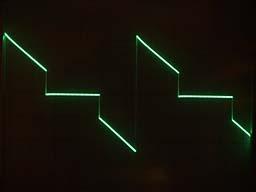 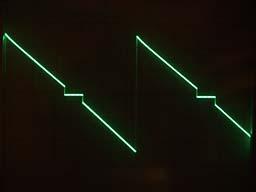 This waveform is a spin-off effect of the fact that I had one unused 4066-section. With it, three op-amps and a couple of resistors, I generate this wave, that is a sawtooth which have had a variable (voltage controlled) portion in the middle cut out. This is similar to ordinary pulse width modulation, but with narrow pulse width the fundamental of this wave is weaker than the lower harmonics. This is never the case with classic pulse width modulation, where the fundamental is always the strongest, even though the lower harmonics are almost as strong at narrow pulse widths. The shape of this waveform is controlled by the same CV input as the down pulse width of the woodwind waveshaper. 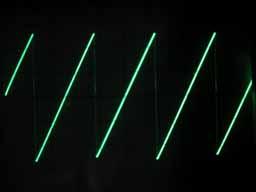 This is a normal sawtooth that has twice the frequency of the other waveforms. It can be useful when mixing with another waveform. It is really a spin-off, as I originally needed it for the odd harmonic waveform (see above). It is generated from basically the same circuit as the ordinary sawtooth. But with different biasing, it produces two "sawteeth" for each period of the triangle wave.

The waveform selector have the following positions:

The waveforms are output on the two separate outputs. If you want to cross-fade between the two oscillators, you can connect the outputs to the inputs of the Voltage Controlled Crossfader.

In the VCO core, the two 5.1 kiloohm resistors between the emitters of the PNP transistor pair and the positive supply must be very carefully matched. Buy a belt of 100 resistors and find two that give the exact same reading on a 4 1/2 digit ohmmeter. Any error here will give a non-symmetrical triangle wave. The same effect will be evident if the PNP transistor pair is not matched well enough. You can adjust small errors with the 20k trimmer.
If the trimmer doesn't have enough range to get a perfect  triangle on the oscilloscope, either the resistors or the transistor pair must be replaced with something better matched. You can try to swap the resistors over. This will either make the error worse or better. If you are lucky, the matching error in the resistors will cancel that of the transistor pair.
For the PNP transistor pair, a MAT03 is excellent, but unfortunately very expensive. Hand-matching two plain-vanilla BC560 can sometimes work almost as well but it's not quite clear what parameter they should be matched for. Matching for Vbe doesn't seem to work very well. It's probably better to match for Hfe. Also, both transistors need to be kept at exactly the same temperature, otherwise the triangle symmetry will be affected at low frequencies. My recommendation is to go for the MAT03 after all.
In the octave quantizer there are five 20k resistors and three 100k resistors that need to be matched. Use the same procedure as above. Here the requirements for matching aren't quite as high as for the VCO core. The matching is done to guarantee that the octave steps are exactly in tune. 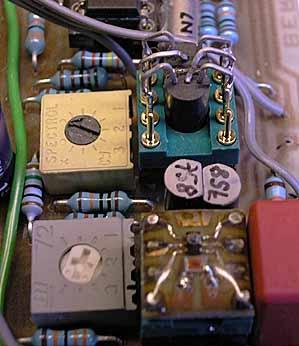 Here we see the tempco/dual NPN module (bottom right) and the PNP module with two matched BC560C (top right). In-between, there are two BC550C, which are matched also. I'm not sure that is necessary though (but it doesn't hurt either..).

These are the alignment steps for the Advanced VCO:

1. Adjust the supply voltages to exactly 15.0 volts (on your power supply).

2. Adjust "LF lin" to get as symmetric a triangle wave as possible over the most used frequency range.

3. Adjust the trimmer "saw shape",  to get a nice and smooth sawtooth, without any step in the middle. Then adjust "CS offset" and "2F offset" to get the right waveforms, between 0 and +5 V.

4. Adjust "sine sym" and "sine shape" while listening to the sine output. You will hear when you have adjusted them for the cleanest sine wave.

5. Adjust "divide offset" so that the frequency divider outputs the same frequency as the input signal at 0 volt CV.

6. Adjust "slope offset" to get a suitable range for the pulse-width.

7. Adjust "slope track" so that the pulse width halves when the CV is increased 1 volt.

8. Adjust "oct/V" so that the VCO frequency doubles when the CV is increased 1 volt.

9. Adjust "freq offset" to get the desired frequency at o volt CV.

10. Adjust "octaves trim" so that every other step of the octave quantizer doubles the VCO frequency.

11. Adjust "fifths trim" so that the steps in-between increase the frequency exactly a fifth.

This board contains a lot of parts and it requires that some components are carefully matched. You should not attempt it, if you don't have access to an oscilloscope and a 4 1/2 digit DMM.
However, the circuits are divided into several function blocks that can be tested separately. Each of these blocks aren't overly complicated. So with a bit of patience, this module shouldn't be outrageously difficult to build.

In addition to the board layout and the component placement plan, there are three different plans for the on-board wiring. The board contains several sub-modules that need to be connected with these wires. In addition, the wave-shapers for the different waveforms have been spread out over different places due to lack of continuous space on the board. Finally, there are several wires needed to distribute the supply voltages to all circuits on the board. The wiring plans contain most of these. Some are probably missing but it should be easier to figure the missing ones out when you have soldered the documented ones.
In addition to this, the chosen waveforms must be connected to the VC waveform selector. This is not included in the wiring plans as you decide in which combinations the waveforms are used.