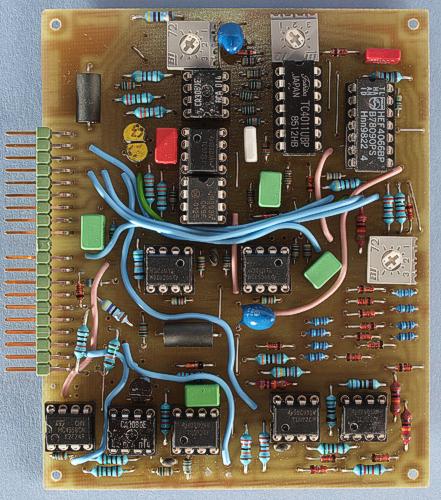 The prototype version of the board. There are a few differences compared to the final board.

This is a combination module with an AD/AR envelope generator and a wave multiplier of Jürgen Haible's design. The latter was inspired by the famous Serge wave multiplier. Together they can produce an effect that sounds like the attack on trumpets and some other brass instruments. The name of the module comes from this sound. The two sections can be used separately for other effects, however. The wave multiplier can be fed either control voltages or audio waveforms. With the latter, it alters the sound a bit like a voltage controlled filter. The difference is that whereas filters remove overtones, the wave multiplier adds new overtones. For audio, the wave multiplier usually sounds best when fed triangle waves.
Note that the waveform of the wave multiplier changes when you add a DC offset to the input signal. Therefore, a DC offset is available as a separate CV input, according to the AMORE standard.
The envelope shaper section is similar to my VCAD but has been redesigned to offer switchable AD or AR response. It has voltage control over attack rate and decay or release rate. The slopes are linear. There is also a parameter for controlling the height of the envelope. This works differently than on the dual VCAD, which has a VCA to control the amplitude of the envelope. Here the height parameter affects the comparator level in the envelope generator itself. Because the attack and decay/release parameters are rates, this means that these times will be shorter when you decrease the height parameter. I added some compensation for this, but since the rates are exponential and the level is linear, this only works for levels from around 50 % up to 100% and only approximately. This circuit is my own design.

There are no special parts needed.

There are three trimmers and they all affect the envelope generator:

Delay
This trimmer adds a fixed delay to the gate signal. The purpose is to prevent the brap effect from be heard when you stop blowing. You can set this to taste.

There isn't really anything particularly difficult on this module, but the parts are densely packed and there are a lot of wire connections to route correctly.

Schematics for the AD/AR envelope generator

Schematics for the JH wave multiplier A